It was originated by Arthur Withers during a trip to Greenville, Carolina. Arthur was having Sunday lunch at his hotel and was served fried chicken, a dish he had never experienced before and fell in love with at first bite. He eventually managed to get the recipe, and left to continue on his trip around the southern states of America. Two days later he was in Montgomery, Alabama when he was taken on a riverboat cruise. The image of a Mississippi steamboat combined with the taste of fried chicken started an idea in Arthur’s head, one which was soon to be realised as the now world renowned Southern Fried Chicken brand. 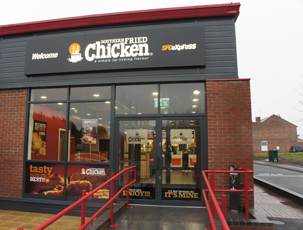 During the 80’s the fish & chip trade began to suffer due to the growth of chains of McDonalds and KFC, and the traditional English take-away couldn’t keep up. With take-aways wanting to compete with the major players and with the help of his son Andrew, the Southern Fried Chicken Brand moved from being an idea to a work in progress.

Working from their family garage, and after many nights of being forced to disrobe before being let into the house due to all the flour on them from the ingredient experimentation, the recipe and procedure for Southern Fried Chicken that we still use today was finalised, and the taste and image that Arthur had seen all those years ago in the deep south was born in the shape of a brand.

The success of this concept spread faster than they imagined and was soon turned into a fully functioning franchise, both in the UK and Internationally.

Southern Fried Chicken provides fresh foods, hearty portions, good service, fair prices and a multi-choice menu, which combines the most successful quick service restaurant products. All these add up to good value for money for customers, and generate increased brand loyalty. Coated fried chicken has been historically difficult to establish in mainland western European countries, like Germany and France, because it has previously been offered as a cheap low quality product. We worked hard to alter this concept by experimenting with recipes to create a flavour designed to excite the European palate. 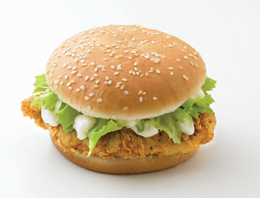 Succulent pieces of fresh chicken are marinated to give flavour right through to the bone. Southern Fried Chicken prides itself on never using processed chicken, only fresh whole pieces & fillets. They are then coated in breading made from the finest ingredients mixed with a unique blend of herbs, spices, and our exclusive Lemon Pepper. They are then pressure fried to perfection. Pressure frying ensures as little oil as possible is absorbed into the product giving a delicious grease free product. But we haven’t just stopped there; we are constantly trying to improve our products to make them the best we can.

The Southern Fried Chicken store itself is also characterised by quality. Our scheme designs have been applied to create clean, spacious and comfortable restaurants, and are suited to all types of premises and existing architecture. Our theme designs provide that touch of originality, which draws customers to return time and time again. And where possible we also offer a home delivery service from our stores.

Adaptability is also a key feature of the Southern Fried Chicken concept. Menu items that are a staple part of life to the regions can be added without problem. Stores too can be adapted. We do not demand a massive site on the main high street of the capital city. We can fit Southern Fried Chicken almost anywhere, as long as you have sufficient passing trade and a suitable customer base to make the business viable, we can help you.

Across their UK branches, Southern Fried Chicken has been undertaking some big changes over the past 18 months, ensuring that all of their branches are operating at the same standard. As Withers explains. “In the past, when my father started, we were just selling more the recipe, without control. And we’ve realised the downfall of that is that some people do it well, some people do it badly. And we’ve been going around closing poorly operated businesses throughout the country, but at the same time opening brand new ones with all the new controls in place, and also offering the older stores the new training programme to convert.”

The aforementioned training programme that Southern Fried Chicken offers is an in depth, month long course that gives potential franchisees experience working in their actual kitchen environments, cooking and processing the food, as well as operating and managing restaurants in a step by step programme. It’s intense, but Withers feels that it is a necessity.

“That’s what people are buying into because it’s not just about buying a machine and cooking some chicken, it’s about delivering a good product with good service. Anyone can fry a bit of chicken, good, bad or indifferent, but delivering it well consistently is the difficult thing. And that’s what they’re buying into when they join us”, added Withers.