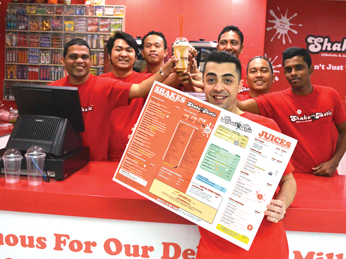 Amir Darabi with the ShakeTastic ‘shakers’ in Qatar.

ShakeTastic, the milkshake and juice bar, has opened its first franchise in Doha, at the Novo Cinema in Pearl-Qatar.

The company says that an unexpected visit to a store, by a member of the Qatari Royal Family, led to this first international outlet.

The founders of ShakeTastic are two former school friends, Josh Kettle and Amir Darabi. They opened their first outlet in North-West London, seven years ago, at the age of 29.

The company opened seven stores within four years and now years has 10 outlets in the UK, including one in Hamleys, in Regent Street, London.

Darabi said: “A Qatari Prince visited one of our bars and loved the brand and what we offered. Like many people from the Middle East and the UAE in particular, Qataris have a real appetite for quality goods and services from Britain. Getting the store opened and up and running was a challenge but also a lot of fun.” 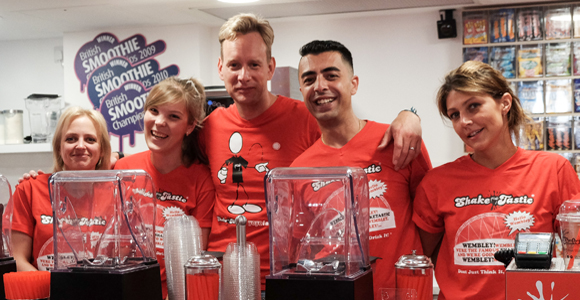 Josh Kettle (centre left) and Amir Darabi at the opening of its store in Wembley, London.

Kettle added: “We were really excited to be approached by our Qatari partners. It is the biggest thing we have done as a company, apart from opening our first bar in Mill Hill.

“We are confident that in such a hot climate non-alcoholic drinks which give customers the option of being super healthy or super indulgent, will do well. The initial reaction from customers has already been fantastic.

“It is an exciting time for us as we will be working in a new cultural environment and serving and learning from a new customer base.”

ShakeTastic also has an outlet scheduled to open in Jeddah, Saudi Arabia, after a Saudi entrepreneur was impressed with the brand. 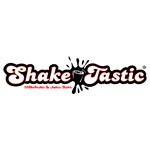 “We were approached by people wanting a franchise within the first two weeks of our opening, back in 2009, but we held off as we want to get franchisees that fit our strict criteria.”

Darabi added: “We now feel the time is right to expand and this year will see ShakeTastic franchise opportunities grow across the UK, as well as other international bars opening.”