Two of the longest-established and best-known British franchise systems, Kall Kwik and Prontaprint, together with their holding company, On Demand Communications (ODC) have gone into administration and Deloitte, the business advisory firm, appointed as administrators.

Kall Kwik has been bought by one of its former managing directors, Nigel Toplis, and Prontaprint bought by two  former directors.

Toplis, who left Kall Kwik in 2002, will now run the network, under the name, New KK, within his Bardon Group as a licensed, rather than a franchised, operation.

Both Kall Kwik and Prontaprint have left the British Franchise Association (BFA) of which they have been long-standing supporters.

ODC was formed in 2000 after the two print networks came under the same ownership to make economies by merging their headquarters back office functions.

Franchisees of both brands have for some time been increasingly critical of the level of support from ODC. Last July a long-running dispute between a large action group of franchisees and the company was only settled through mediation and offers by ODC to increase its investment in marketing and re-negotiate their franchise agreements.

The franchisees were also given the opportunity to withdraw from the franchises without penalty and run their businesses independently under new names.

Around half the group chose the latter option and are now expected to form voluntary co-operative buying groups for materials, equipment and products, particularly paper, ink and graphics software, to regain some of the major benefits they enjoyed as franchisees.

Pioneers of franchising
Both Kall Kwik and Prontaprint were pioneers of franchising in the UK with Prontaprint having been founded in 1970 by Edwin Thirlwell and Kall Kwik in 1978 by Moshe Gerstenhaber. The two chains battled for the number one spot in the then new quick print marketplace. The two founders subsequently both made millions from the sale of their businesses, Thirlwell moving to Jersey and Gerstenhaber to Switzerland.

One of the legacies of the two chains has been to create a cadre of experienced franchise managers, such as Toplis, who now hold important posts around the sector. Thirlwell and Toplis are past chairmen of the BFA.

The brands both went on to earn Business Superbrand recognition under the ownership of the Adare print group and later an Irish investment firm. Their top performing franchisees reached turnovers of more than £1m.

Toplis has added Kall Kwik to his Bardon Group, which has three franchise systems, Recognition Express (corporate badges and awards), ComputerXplorers (computer training for three to 13-year-olds) and Zip Yard (retailers of garment alterations and repairs).

Kall Kwik was formed by Gerstenhaber as the UK master franchise of a U.S. international franchisor, Kwik Kopy of Houston, Texas, and following the appointment of administrators, the American firm approached Toplis to save the UK business. As a result, he acquired the sub-licence for the Kall Kwik trademark in the UK and Ireland. 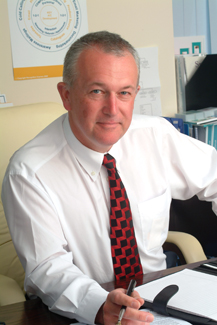 “Although I left Kall Kwik in 2002, I was asked by Kwik Kopy to get involved after it fell into administration,” said Toplis (right). “This was something I couldn’t turn down. I believe the arrangement we have now reached with all parties lends itself to a new era for Kall Kwik and will lead to the strengthening of the brand in the marketplace.

“I have always had a very personal attachment to Kall Kwik and remain close friends with a number of its franchise owners. When I was at the company we were very proud of the work we all did in building the brand and its position as the number one quick printer in the UK.”

Mediation
Mark Abell, a leading franchise lawyer with Field Fisher Waterhouse, represented the franchisees of Kall Kwik and Prontaprint in their recent mediation with ODC.

He recalls: “Some 18 months ago we started acting for more than 120 franchisees of the two brands in a dispute about the level and quality of support that they were being provided by their franchisor.

“The challenge for the new owners is to rebuild the brands to their former glory. I wish them the best of luck in doing so.”

Note of caution
Sounding a note of caution, Abell said that the fate of the two brands prompted one to consider the way in which franchisees of other systems might also be impacted by the continuous development of technology. The situation perhaps offered a lesson about sustainability and the need for franchisors to keep up with changes in their particular market.

“The competitive environment in sectors that are heavily based on technology, such as telecommunications, photographic services, and printing, have changed beyond recognition over the last 20 years,” said Abell. “The advent of digital and other technologies have not only improved quality, but also developed new products and channels of delivery.

“Franchisors operating in such sectors who have anticipated these shifts and rigorously implemented change management strategies throughout their network have prospered, together with their franchisees. Those who fail to adequately embrace changes for whatever reason can find the going very tough with margins falling, the development of new competitive products, and their competitors’ levels of service improving.

“In challenging times, there may be a temptation for franchisors to preserve their own margins at the expense of their franchisees by reducing the levels of support they offer them,” Abell added.

“This is something that the BFA needs to be aware of as it is likely to become more and more of an issue over the coming years. Perhaps it should even consider adding some words to its Code of Ethics to require franchisors to make reasonable endeavours to ensure that their franchisees are kept up to speed with the relevant, sector-critical technology.”

A fourth company in the group, 1st Local also went into administration. This ran company-owned stores in London (two), Bristol and Middlesbrough, and these have been closed. There have been 62 redundancies across the four companies.