World-renowned franchise lawyer, Mark Abell, has been awarded the degree of Doctor of Philosophy (PhD) by the University of London. Dr Abell, co-head of European law firm, Field Fisher Waterhouse’s franchising and licensing practice, was awarded the doctorate for his thesis on the Regulation of Franchising in the European Union.

The thesis is the product of over five years intensive research on the laws of franchising in over 50 countries, including the 27 EU member states. His thesis, the first of its kind, will be published as a book.

Lack of data
Abell, says he started his research back in 2006 because “there is a complete dearth of objective academic analysis of how franchising is regulated in the EU, and the impact the regulatory regime has upon business.”

He continues: “This lack of objective data has made it impossible for the EU Commission, member state governments, and national franchise associations to adequately understand the impact that the current legal regimes are having on franchising and its ability to actively promote cross-border trade within the European Union.

“It also makes it difficult for both large companies, and small and medium-sized enterprises to understand how to best re-engineer their corporate business and successfully use franchising to expand across the 27 member states that comprise the EU.”

Franchising underperforming
Through a combination of empirical research and comparative legal analysis,  Abell’s thesis highlights the failure of franchising to realise its full potential to contribute to the EU’s economy due to the heterogeneous nature of law in each of the 27 member states, and the lack of any EU franchising law. It then makes a number of radical proposals to better regulate and promote the use of franchising within the single market.

Abell identifies franchising as a specific, distinct and uniform type of commercial activity with significant economic impact in the EU. It stimulates economic activity by offering significant advantages to all those involved, improving distribution, and giving business increased access to other member states. There are nearly 10,000 franchised brands in the EU, which account for over Euros 215 billion (U.S. $300 billion) turnover per annum.

However, after comparing European franchising to the scale of franchising in the U.S. and Australia, Abell suggests that franchising is not realising its full potential in the EU. 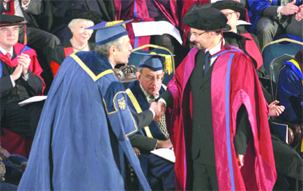 Inappropriate laws cause underperformance
Abell’s thesis shows that this under-development of franchising in the EU is, in part, due to the regulatory environment to which it is subject. This is primarily because of two distinct factors.

Firstly, a failure by the member states’ regulatory systems to adequately govern franchising. They fail both to adequately reinforce the economic drivers that attract franchisors and franchisees to franchising, and reduce to an appropriate level the inherent consequential risk to which both parties are exposed.

Secondly, there is a lack of homogeneity between the different legal systems which amounts to a barrier to trade between member states.

Eight EU member states have franchise laws, but no two of them are the same.

Other jurisdictions, such as Germany and Austria apply a wide range of consumer laws to over regulate franchising – despite clear statements from both the EU Commission and the European Court of Justice that this is not appropriate.

EU franchise law needed to promote the use of franchising
Abell proposes the adoption of a European Franchise Directive which will not only harmonise the approach of the EU’s legal systems towards franchising, but will also re-enforce the relevant economic drivers and reduce the inherent consequential risks to an appropriate level.

He suggests that the directive should be drafted so as to attract business to use franchising by promoting market confidence in franchising, ensuring pre-contractual hygiene and imposing a mandatory taxonomy of rights and obligations on the franchise relationship.

The thesis suggests that franchising be defined in accordance with the so-called marketing plan approach that originated in the U.S. and is found in various forms in six of the eight EU member states with franchise specific regulations. It focuses on independence, economic interest, the brand, the business-format, control and ongoing support.

It also includes a qualitative threshold to ensure that the advantages of being a franchise are only available to businesses that have a track record and that start up franchises are not overwhelmed with regulatory requirements.

A franchise that has not operated the business format for at least 12 months, or which is operating less than four outlets, will not have to comply with the obligations imposed by the directive, but at the same time will not be able to enjoy some of the benefits that accrue to a franchisor under it.

Abell dismisses as ill-conceived and impractical the proposal made by a group of academics appointed by the EU Commission to re-engineer the EU’s regulatory environment for franchising by introducing EU-wide commercial code. He also dismisses as unhelpful, uninspiring, and unoriginal the draft franchise law published by UNIDROIT.

New rights for franchisors
Abell also advocates the removal of the suffocating impact of EU competition law, which he states to be contrary to both the recommendations of the OECD and the ‘per se’ approach advocated by the ‘Chicago School’ of anti-trust academics.

He does this by recommending that franchisees be allowed to compete on a level playing field with corporate chains by having the right to fix their franchisees’ retail prices, and control their e-commerce activities. In academic legal circles this is big, brave stuff.

Potential franchisees need to be better educated
In order to help ensure pre-contractual hygiene, and so prevent the mismatch of expectation that causes most disputes between franchisors and their franchisees, Abell recommends that potential franchisees should not only be given access to appropriate information before they enter into the franchise, but must also be equipped to interpret that information in an appropriate manner.

This means that potential franchisees must be educated out of the psychology of failure that encourages failed franchisees to blame others for their own failures. They must understand what they are committing themselves to when they buy a franchise and the need to take and follow appropriate expert professional advice.

Abell proposes that professional advisers, such as lawyers and accountants should be required to take short on-line franchise education courses if they are to advise potential franchisees and that potential franchisees investing more than £20,000 must produce a certificate from their advisers to prove that they have taken such advice .

He proposes that national franchise associations should be funded by central government and, instead of trying to regulate franchising, be concerned with promoting both best practice in franchising and the use of franchising in the EU.

He suggests that this should be given in a set form 15 working days before execution or payment, covering details of the identity and experience of the franchisor, the franchise network, the terms of the franchise agreement, and any earning claims. It should be in plain language and contain an appropriate risk statement.

A copy of the franchise agreement in the form in which it is to be executed should accompany the disclosure document.

There should also be a five-day cooling off period after execution.

Failure to comply with the disclosure requirements should lead to the right for the franchisee and government authorities to terminate or claim damages within 12 months of the franchisee becoming aware of it, or 24 months of the date of execution, whichever is the later if it resulted in defective consent having been given. The regulatory authorities should be able to impose penalties, including disqualification. Electronic disclosure should be permitted.

There should be personal liability for any individual responsible for the disclosure document being inaccurate.

Those disclosure obligations should also apply to foreign franchisors with no presence in the relevant member state, who should be under an obligation to disclose relevant information about analogous markets.

Due to the ever-changing nature of franchising and the impact of fast changing technology on the markets he proposes that there should be a regular review of the law every five years.

He is against any suggestion that franchise documentation should be registered on a public register due not only to the practical difficulties it would give rise to in the 27 EU member states, but also due to the cost of its effectiveness and the likelihood of it making any tangible contribution to accentuating the impact of the second commercial imperative on the EU’s legal systems.

Mandatory clauses
In order to re-enforce the economic drivers that attract both franchisors and franchisees to franchising and reduce the inherent consequential risk to an appropriate level, Abell recommends that franchise agreements have mandatory clauses imposed on them.

Unconscionable conduct is conduct showing no regard for conscience, or that is irreconcilable with what is objectively right or reasonable, taking into account the best interests of the franchise network before those of individual franchisees and the franchisor.

In order to increase certainty, details of the grounds upon which unconscionability will be judged, and examples of what amounts to unconscionable conduct should be given in the directive.

Radical new approach
Abell says: “I am advocating an entirely new and radical approach to the regulation of franchising. Most jurisdictions fail to recognise the hugely positive impact that franchising can have on both businesses and national economies.

“Their laws impose far too much of a burden on franchisors. They do not actively encourage companies to use franchising as a route to market – a route that allows them to grow with a much lower capital requirement and without the need for complex and expensive human resource management structures and a route that allows them to access strongly incentivised, high quality management with a good knowledge of the local market.

“They use too much stick and not enough carrot. The regime that I am proposing actively promotes the use of franchising by companies so that it can fulfil its potential to contribute significantly to the EU’s economy.

“Particularly in these harsh economic times, the legal systems in the EU should be encouraging companies to expand across member state borders, rather than becoming barriers to economic growth,” Abell concludes.

Definitive work
The leading U.S. franchise lawyer and chair of the International Bar Association’s Franchising Committee, John Baer, is clear that Abell’s thesis is “a monumental and definitive work.”

Baer, a partner in the Chicago office of U.S. law firm, Greensfelder, Hemker & Gale states: “Dr. Mark Abell’s thesis is not only the leading contribution to the academic study of franchising in the EU, but the paper convincingly demonstrates how franchising has failed to fulfil its potential in the EU due in part to the regulatory environment, and calls for a re-engineering of that EU regulatory environment.

“This paper is a significant achievement; it is unusual for a leading practitioner to also have devoted the time and energy needed to produce a paper meeting the high standards of academia. This is a must read for the serious student of franchising in the EU,” says Baer.