University students and graduates, who are entrepreneurs, are being given the opportunity to compete for cash and mentoring in the Lloyds TSB Enterprise Awards.

There are an estimated 55,000 student businesses in Britain in sectors as diverse as design, IT, catering and media. To launch the initiative, Lloyds has joined forces with the National Consortium of University Entrepreneurs (NACUE), a charity that encourages entrepreneurial activity in universities.

The Best Enterprise Award will receive £50,000 and the Best Start-up Award, £10,000. Both will also have two-years mentoring from senior Lloyds representatives and a business session with a Lloyds executive.

Entrepreneurs who studied at universities, who have graduated in the past five years and have been trading for more than a year, will be able to enter the awards by visiting www.lloydstsb.com/enterpriseawards.

The initial heats will be in February across six regions in England, as well as in Scotland and Wales. The two winners in each heat will compete for the two top awards in March. 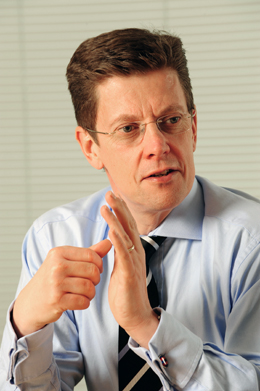 Announcing the scheme, John Maltby (pictured), group director, commercial, of Lloyds Banking Group, said: “Britain has a proud history of enterprise, and for generations our universities have played a fundamental role in nurturing business talent. We want to ensure that this does not go unrecognised, and to play our part in nurturing and supporting entrepreneurs to give them the best chance of future growth.”

Mark Prisk MP, the Business and Enterprise Minister, commented: “The Government wants to grow the next generation of entrepreneurs by ensuring that young people get hands-on experience of enterprise at college and university. I encourage students and graduates to take part.”

Hushpreet Dhaliwal, chief executive of NACUE, said: “Our universities are home to a huge number of emerging enterprises. With the right guidance and support, these businesses could so easily be the success stories of tomorrow. We’re delighted to be working with Lloyds, which is playing a leading role in nurturing enterprise, and the awards are another example of its commitment to help businesses grow.”

Emma-Jayne Parkes, who with Viviane Jaeger founded a designer brand of colour-changing products, such as umbrellas and shower curtains, said: “Our business was born at university and we know from experience how valuable the university environment can be to entrepreneurs. There are many thousands of start-up businesses at universities, but the real issue is the path they take after graduation. Awards such as these can play a huge role in encouraging entrepreneurs to progress their ideas and build their business.”

Since launching its SME charter in 2010, Lloyds has supported more than 200,000 start-ups. During the first nine months of last year, the group provided £32bn of committed gross lending to UK businesses of which £9.6bn was to SMEs.