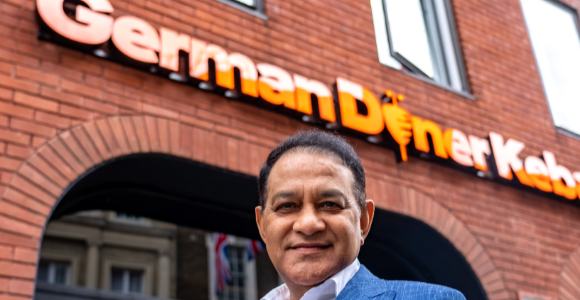 German Doner Kebab (GDK) reports that it has joined forces with Atul Pathak, OBE, who was formerly the UK’s largest McDonald’s franchisee with 43 restaurants throughout the UK.

Having sold his portfolio of McDonald’s restaurants after nearly two decades and employing over 3,500 staff, Pathak’s GDK development plans include 30 sites with 10 scheduled by 2023 across the South of England.

Pathak comments: “It’s hugely exciting to be teaming-up with German Doner Kebab. After nearly 20 years with McDonald’s, I decided to sell my business and explore new opportunities that reflected the changes we are seeing amongst Gen Z and Millennial consumers.

“It was a great journey to grow from one restaurant to 43 and be the largest franchisee of McDonald’s in the UK. But, I felt it was time for a new challenge and when the opportunity to partner with German Doner Kebab arose it was a perfect fit for our new ambitions.

“German Doner Kebab is at the forefront of a new age of fast-casual dining in the UK and it is an exciting time to be a part of the brand story. I look forward to playing a key role in strengthening German Doner Kebab’s position as the UK’s fastest-growing restaurant chain.”

Growth plans
The partnership with Pathak comes as GDK sees its 100th UK outlet open with plans for 78 new restaurants in the UK during 2022, building significantly on the 39 opened during 2021. The company says that GDK offers a premium, high quality approach to the traditional kebab as it uses premium quality ingredients that are freshly prepared in front of customers, using open kitchens in all restaurants.

Imran Sayeed, chief executive officer of GDK, said: “The arrival of Atul Pathak is a significant moment for German Doner Kebab as we build the fast-casual brand of the future. He is an established and prominent franchisee who has experience in growing and developing a brand portfolio in the UK. Atul’s experience in Drive-Thru will also be invaluable as we explore more and develop new formats and concepts for the brand.”

Based in Glasgow, Scotland, GDK reports that the brand is growing in Sweden and the Middle East, in addition to expanding in the U.S., Canada and other key locations in Europe.

Pathak’s was awarded his OBE in 2015 for Services to Entrepreneurship in The Queen’s Birthday Honours list.