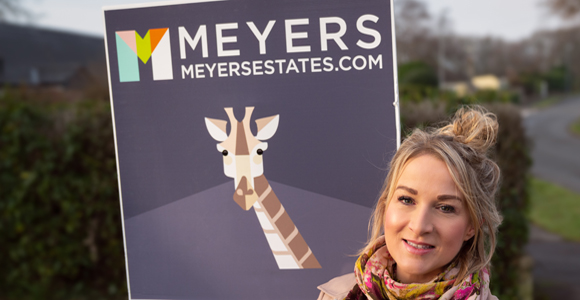 Being furloughed at the start of the pandemic last year, Becky Peters decided it was the right time to take charge and move on with her career. Having worked previously for an estate agency for 14 years she had always wondered if setting up her own business could be the future.

Here Peters shares her franchise journey to becoming a Meyers Estate Agents franchisee for Wimborne and Broadstone in Dorset, and reports agreed property transactions worth £5.99m since joining the company.

“A few years ago, I had become aware of Meyers locally in Dorset where I live. I’d seen the sale boards around and had the odd conversation with company founder Mark Meyer but at the time they weren’t ready to take on franchisees and I had two young children, so the timing wasn’t quite right.

“The day after the first national lockdown I was furloughed. This reconfirmed my view that it was time for a change. I called Meyers and a few months later we set up the franchise agreement. Although I was an experienced agent, I attended the intensive training course at Meyers’ Hub office in Poundbury during the summer with some training taking place online. I believe you can never know too much so I was keen to learn more about the Meyers way.

“Training covered core values and how to gain traction. Much of this is about being involved in community life and learning the processes which work. Mark Meyer has been influenced by Australian and American models so finding out how these are applicable to the UK market was fascinating.

“Everything I needed to get started was provided. We call this the ‘toolbox’ and it included suggested contacts for accounting and insurance for example. My website was ready by mid-September and I already had one instruction lined up. I literally haven’t looked back.

“Although I cater for all values of property, I’ve been surprised at some of the higher value transactions I’m involved in. The average property value is around £400,000 and my highest instruction to date is £850,000 and so that’s testament to the quality of our marketing campaigns.

“A typical day working for the old agency could often end up as a 12-hour day. With two young children this was tough, as I wasn’t even able to drop or pick them up from school. Now my schedule is my own and much more flexible. After the school run, I’m at my desk in my converted spare room by 8.45am. We work from home which keeps overheads low. I do a ‘zoom’ a day which might be with a prospect or networking group. Usually the afternoons are taken up with viewings.

“Time management is important. We are trained to have ‘rocks in place’ in our diaries for things that can’t move like picking up the children or Wednesday lunchtime exercise. Mentally this is important, as work can be addictive.

“At Meyers we all have an animal avatar which is fun and represents our core values. Mine is a giraffe which is elegant and interesting. It always catches attention on our sale boards. We also like to give back to the local community and all support charities of our choice. I support the Air Ambulance as well as Team Max, which was set up by a friend to support bereaved families who have lost children.

“With so many unknowns, it’s been a far from normal year to start a new business. However, moving on has given me back control. I love being able to personalise the experience for the buyer and helping people sell their houses faster through better marketing. It provides a great level of job satisfaction.

“The franchise network is also really supportive – far more than in my previous employed role. We communicate daily on WhatsApp and I have regular virtual meetings with management and trainers to ensure everything is on track. For anyone looking to make the move, I would highly recommend Meyers Estate Agents.”