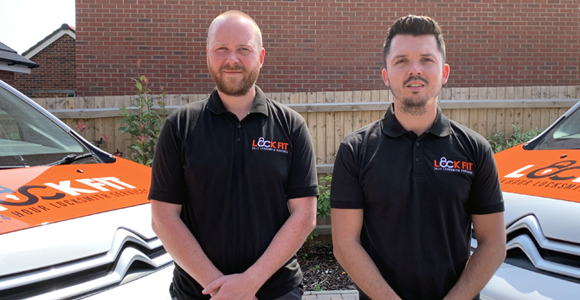 Two sports car salesmen from the West Midlands have switched careers by investing in a two-region locksmith franchise for Coventry and Warwick/Leamington Spa, reports LockFit.

Chris Hitches (31) and Lewis Moore (30), both from Knowle near Solihull, had previously worked for Porsche and BMW but despite the radical shift in career, the childhood friends say they have already achieved success.

Hitches explaining their decision to join the franchise said: “The car industry had been going through some major changes which neither of us was able to control partly down to Covid-19, so we have been looking into various investment opportunities for a while.

“When we saw what LockFit was offering, we were both really keen. The start-up costs were very modest but in terms of training, support, and credibility, LockFit stood out a mile and it’s been fantastic right from day one.”

Established in 2018, LockFit is a 24-hour mobile locksmith service for both commercial and domestic customers. Its service includes assisting customers who have lost keys, locked themselves out or need to secure premises following a burglary. The company says it has sold nearly 50 franchise territories across England, Scotland, Wales and Northern Ireland.