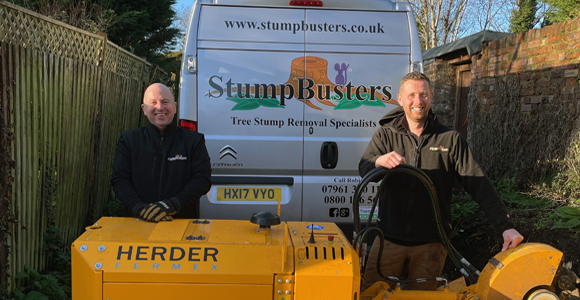 Two friends have formed a business partnership to buy the StumpBusters franchise for the territory of East and West Kent. The franchisees, Richard Cook and Robin Spicer will begin operating their tree stump grinding business together from February 2021.

Cook (38) whose father Mike was one of the original founders of StumpBusters, already owns three territories, having joined the business immediately after leaving university in 2006. Spicer (40) is an experienced motor mechanic, having clocked up 23 years of with his former employer carrying out MOT’s, servicing and repairing cars.

Cook explaining the reasons behind the new business partnership, said: “I already have a really busy and successful StumpBusters business spread over three territories, South West London and Surrey, West Sussex and East London. I wanted to expand the business but it’s not always easy to find reliable staff.

“I thought the best way would be to go into partnership with someone, so I know he’ll be as committed to making the business a success as me. I’ve known Robin for years, he is a family friend having serviced all our cars and my work vehicles. He’s hard working, knows his way around an engine, wears shorts all year and doesn’t feel the cold – the perfect man for the job!”

Spicer, having been a mechanic since the day he left school, said he was really excited about changing career: “I want to do a job where people are genuinely pleased with the outcome, when their garden looks better or their land has a better view once I’ve left. Customers coming into garages just want the job done as quickly and as cheaply as possible, no one is ever happy about spending money on their car.

“I also want a better work/life balance. I’d like to get home before 8pm at night and spend some time with the children. I’m also really looking forward to being my own boss, but money isn’t the motivating factor here, it’s about quality of life. Being furloughed made me realise I actually don’t need that much to live on, I can go without so many things we took for granted. I’m really looking forward to being outside all day, breathing fresh air and working with clients who are genuinely pleased to see me.”

Darren Taylor, managing director of Taylor Made Franchising who own StumpBusters, added: “We wish Richard and Robin the very best of luck. As an existing franchisee Richard will be sharing his knowledge with Robin, enabling them to run a really slick operation but with our continued support at head office. Franchisees often come to us for a better work/life balance and for someone who likes being outside all day, I can think of no better career change for Robin.”

StumpBusters was founded in 1991 and has over 41 franchised territories. The company says that franchisees are fully qualified, trained and insured professionals who hold City & Guilds and CSCS (Construction Skills Certification Scheme) accreditations in stump grinding and use of a chain saw. Its service is used across a variety of locations from golf courses and large site clearances to parks and private homes.