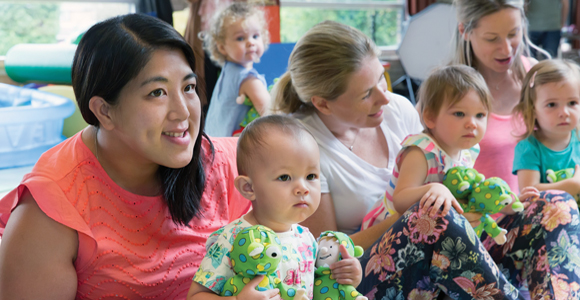 The parent and child sensory activity franchise, Baby Sensory, has announced that it has partnered with the charity for young people, OnSide Youth Zones, to launch a new charity pilot called BabyZone.

The aim of BabyZone is to make sensory classes available to families on a low income who wouldn’t otherwise have access to early years development classes for their babies or have the opportunity to meet other first time parents on a regular basis.

Two pilots are currently running at Future Youth Zone, Barking and Dagenham and Legacy Youth Zone, Croydon as part of the initial phase whereby the full range of Baby Sensory classes are being delivered to new parents.

Baby Sensory says it welcomed the Duchess of Cambridge to its sensory class in Cardiff, which was the second of a three-part trip to launch a landmark survey on early childhood development.

During her visit the Duchess spoke about feeling isolated in North Wales as a first time mum, when Prince George was a tiny baby and Prince William, a pilot. The Duchess reportedly also spoke about the pressure placed upon parents today as they find it harder to rely on other generations for support as families have now become so spread apart.

Kate Denham, who is leading the BabyZone project, commented: “We are delighted to be working with Baby Sensory on this important project. If the pilot phase is successful we would like to create a dedicated charity to roll out Baby Sensory’s award-winning programmes to low income families across all of our nationwide Youth Zones.”

The BabyZone sessions are aimed at parents and babies from birth up to three years of age and are designed to enhance early years learning and development through exploratory play.

Sean McKeon, general manager for Baby Sensory, explained: “Everyone should have the opportunity to spend quality time with their baby in a safe, established and nurturing environment, regardless of income.

“Being involved in such an important initiative is an honour for the franchise and we are committed to delivering a number of exciting sensory programmes to those families across the country that are really in need of the support.

“Raising a new baby can be very isolating and lonely for first time parents and anything we can do to get people out there, socialising and talking to other like-minded families, is a positive step in the right direction.”