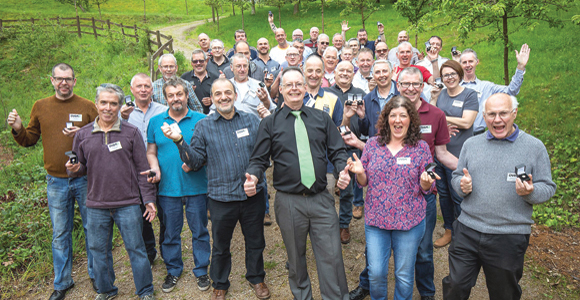 Established by Rik Hellewell in 1994 from an initial pilot scheme, Ovenu has grown to become an international franchise company that operates territories throughout the UK, Australia, New Zealand as well as in Europe.

It was five years later in 1999 when Hellewell implemented the franchise model and Ovenu began taking on its first franchisees, which included Paul McCormack (Ovenu Basildon) and Adam Penniston (Ovenu Wokingham).

During the AGM, 39 of the 51 franchisees who have been with the company for more than 10 years, were celebrated and presented with a commemorative pin to mark their dedicated service. Between the cohort of franchisees, they have a combined 500 plus years of service.

Ovenu now plans to expand further in the UK and across its global operations with new franchise territories.

Hellewell said: “I am incredibly proud of how Ovenu has grown and developed over the last quarter of a century from an initial concept to the international brand it is today.

“Our business model has been tried and tested over the last 25 years. It has provided our franchisees with tremendous value for money, excellent returns on their investments and allowed them to establish their own small businesses.

“Nothing gives me more joy than when I hear that a franchisee has enjoyed the level of success that they wanted when I first sat down with them at the start of their franchising and Ovenu journey.”

‘Very humbling’
Hellewell added: “To have such a large percentage of our franchisees, who have been with the company for at least 10 years, is very humbling and demonstrates the sustainability and confidence in the brand and business model.

“We are now expecting to carry on this positivity, expanding into new areas – in the UK and abroad – and will hopefully celebrate even more milestones in the future.”

The Ovenu valeting process involves dismantling key components of an oven such as the door, interior panels, fan and shelves and placing them into design-registered tank equipment, which uses safe, non-caustic products to clean the oven parts.

The whole process takes around three to four hours and leaves the oven, hob and exterior in immaculate condition.