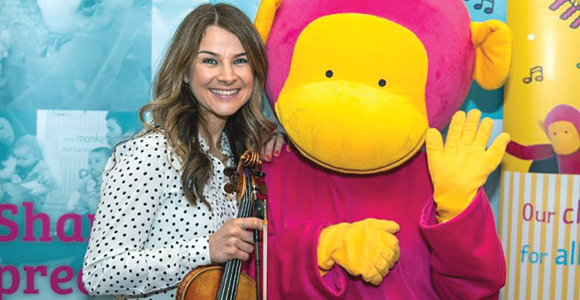 The children’s music class franchise, Monkey Music, has announced a new partnership with Izzy Judd, the musician, author and wife of Harry, the drummer in the band McFly.

Angie Coates, the founder of Monkey Music, introduced Judd’s new role as company ambassador to her franchisees at its annual franchise conference, where Izzy spoke of her belief in an early musical education and shared stories of her family time at Monkey Music.

Izzy also presented the winners of the Monkey Music Franchise Awards 2019 with their M’Oscars and entertained the audience playing her violin during the launch of a Monkey Music fund raising song ‘Music is a Gift’ for the music therapy charity, Nordoff Robbins.

The other speakers at the conference included Dan Early, who hosted an interactive percussion session, Carys Jukes from the BFA and Andy Bird, professional coach and author who led a workshop on leadership.

Monkey Music offers music classes for children from as young as three months to four-years-old. The 30-minute sessions aim to captivate the children with a combination of songs, movement and musical games in a stimulating and friendly environment.

The company says that the ear is the first organ to develop fully in the womb, enabling babies to take comfort in the music of their mother’s voice at just 11 weeks. It adds that all children are born with instinctive musicality but only if this is encouraged early enough will a child fulfil their musical potential.

Monkey Music teachers are carefully chosen for their natural ability to communicate with and entertain young children and their carers, so they can experience a unique mix of musical fun and learning. The company currently has 48 franchisees operating in over 300 locations across the UK.