With eight new franchisees on the way, and multiple branches renewing their contract for the second or even third time, there seems to be no stopping this juggernaut business. The company is predicting an incredible £40m turnover for 2017.

Dream Doors’ success hasn’t gone unnoticed in the industry either, with it being nominated for the coveted Franchisor of the Year award at the BFA/ HSBC franchising awards – for the second time!

The Dream Doors service is a tried and tested formula with business growing exponentially every year. The value of its service is obvious and is reflected through the success of its franchisees. 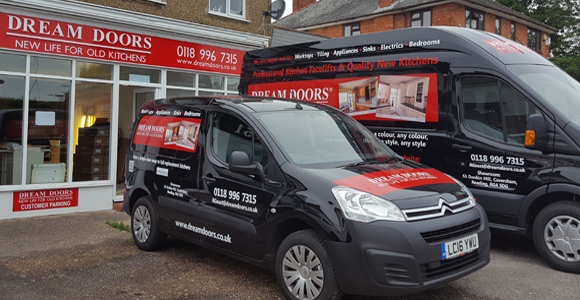 Franchisees’ testimonials
Sandy from Dream Doors, Brigg, had this to say: “I wasn’t aware that replacement kitchen doors were an actual business, I immediately thought how prosperous such a specialised service could be. The strengths were plain to see, I was sold – hook, line and sinker!”

Sandy and her partner Nick had no prior kitchen experience before showing an interest in the brand. Nick had sales experience in the sea food industry and Sandy made bespoke curtains from home.

The two very quickly become experts in the field, though, due to Dream doors extensive training programme as well as the support from head office. They were also assigned a business development manager who oversaw their growth and often still lends a hand to this day. All this support is provided to every franchisee within their franchise package, and continues indefinitely.

Kevin from Dream doors, Teeside, was especially happy with the company’s support, saying: “I can truly say that the support we have received has been outstanding – not only at the outset, but ongoing indefinitely even once you are up-and-running.

“Each member of staff we’ve met are very knowledgeable and professional and are always both available and willing to help you in any area of the business. There is also a great sense of humour amongst the team, they all love to have fun while they work, which suits us fine – we feel that we fit straight in to the Dream Doors family.”

Checkatrade rating
Of course, Dream Doors prides itself on its elite network, meaning only those who are determined to succeed are accepted as a franchisee and given their very own showroom. The franchisees skill can be seen through their immaculate Checkatrade scores, with a network average of 9.7 out of 10.

With over 50,000 kitchen makeovers and 28 awards since its establishment in 1999, Dream Doors has become a recognised brand with fantastic customer and franchisee testimonials. If you’re considering your own franchise and see the value inherent in the Dream Doors service, then get in contact today.

Helen Mahon, who owns the Norfolk franchise with husband, Philip, was once in the same position as you. The two have now signed up for a third term of their franchise, running their own Dream Doors operation for over 10 years! Helen says: “I’d never done anything like this before. Running a business, selling and working in the kitchen industry were all very new to me. Yes, it was a steep learning curve, but it was also an exciting challenge. And it was definitely the right career move; I’d never felt so excited, enthusiastic or inspired by work before!”