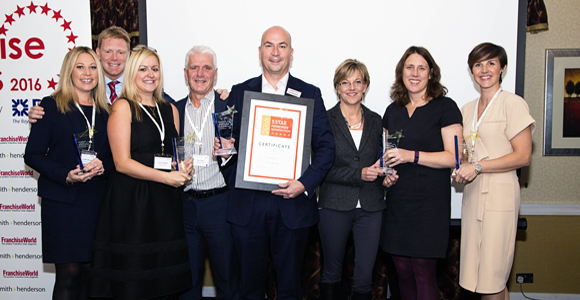 Winners in the Best Franchise Awards 2016.

The awards, organised by Smith & Henderson, the research firm specialising in franchise benchmarking, are based on feedback from franchisees on the quality of their franchisor’s system, training and leadership, and their relationship and satisfaction.

New to the Best Franchise Awards this year was an award for the best service provider, which went to Platinum Wave, the franchise consultancy firm.

The conference, attended by over 120 delegates, brought together a cross section of franchisors and service providers, who enjoyed a selection of educational and informative talks and presentations.

Steven Frost, chief executive of Smith & Henderson, said: “It is a well-known fact that a good testimonial is worth its weight in gold, which makes these awards all the more special.

“To reach the finals of the awards, each of these businesses had to receive outstanding testimonials from their current franchisees. The winners were then chosen for their ongoing commitment to help their franchisees be more successful, and for constantly innovating to stay ahead of the competition.

“The winners should be incredibly proud of themselves, their teams and the franchise opportunity they offer because they truly are the best of the best in the UK. Anyone looking to buy into a franchise, would be well advised to give these companies a closer look,” added Frost.

Paul Clegg, managing director of Coconut Creatives, the PR firm and co-sponsors of the event said: “We’ve been amazed at the standard of entries this year and we’re proud to be part of such a great event and showcase the successes of franchisees and franchisors.

“There are so many great business people assembled here who deserve the recognition that the Best Franchise Awards provides, and I congratulate you all.”